Eskom is after pilfered money. How does that help you?

The positive action behind chasing money that various dubious characters pilfered from the failed SOE appears to be at hand. The sabre rattling in the press from Eskom and the SIU is a small step in the right direction. This could take years in court once the ball starts rolling and the past executives with rather sticky fingers are going to use the same ill gotten gains to use the self-same Stalingrad approach as used by other very dodgy past presidents.
The drop in the ocean that Eskom are chasing is a starting point, as are the other actions they are pursuing like re-negotiating very poorly structured coal supply contracts amongst many other procurement gone wrong gravy train ‘supplier’agreements.
In the grand scheme of things chasing some 5 billion from past executives is a small drop in the ocean BUT it is progress and action. It will hopefully be the example that cronyism and ineptocracy will ultimately not play. 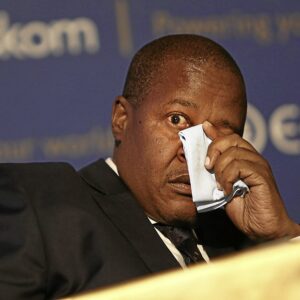 NOVEMBER 3, 2016. Eskom CEO Brian Molefe broke down in tears as he spoke about his relationship with the Guptas and Saxonwold, following a damning public protector report into state capture.Eskom released its interim financial results to end-September 2016 under a cloud as its CEO Brian Molefe has been heavily implicated in the state capture report. Thuli Madonsela. PHOTOGRAPH: ALON SKUY/THE TIMES 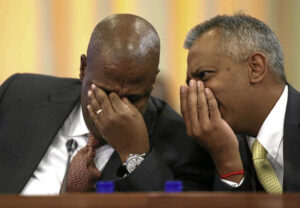 CAPE TOWN, SOUTH AFRICA – MAY 30: Eskom CEO Brian Molefe and the power utility’s CFO Anoj Singh during a meeting with Parliament’s Standing Committee on Public Accounts (SCOPA) on May 30, 2017 in Cape Town, South Africa. The Eskom delegation appeared before Scopa to explain how coal contracts were awarded to the Gupta-linked Tegeta company. (Photo by Gallo Images / Sowetan / Esa Alexander)
——

Accountability, political will and competency need to be at the forefront of all SOE’s, especially one as crucial as energy supply.

Our neighbours are all starting to tender for renewable energy sources like solar and wind, having realised that IF Eskom rights itself, this will take a minimum of 5 to 10 years and that the price of this energy will make it unattractive.

Where does this leave the consumer? Corporate, industrial and individual consumers will continue to bear the brunt of years of waste, corruption, cronyism and ineptocracy. It leaves you with expensive and unreliable and ”dirty’ electricity with no respite for the next many years.

Simply put, you cannot afford not to switch to solar power!

Breaking: Eskom and the SIU act to recoup funds from former executives